Welcome to the cure for 'Stinkin Thinkin'

You already possess the SKILLS... to discover your own greatness!
(Click on any image to enlarge.)    #2-174-Thursday

Think of the 'IQ Morning Report' as... "Breakfast for your Brain"
The biggest secret of all is... We become what we THINK about. (Napoleon Hill)

﻿At any moment in time.. the very next decision you make has the power to change the course of your life forever.﻿

Chad Prather has some advice for men.
philosopher, Will Rogers. Chad's observations are every bit as funny as Will Rogers' observations about life in the United States. Rogers is remembered for humorous quotes like: "Diplomacy is the art of saying 'Nice doggie' until you find a rock", "A fool and his money are soon elected.", and "Good judgement comes from experience and a lot of that comes from bad judgement."

Steve Jobs was famous for saying, "There's Got To Be A Better Way"
parent's garage. Because of his value oriented philosophies, Apple has grown to become the ultimate 0global giant in the field of personal communications and is also, the most profitable company in the history of America. Suggest you Learn (all you can) From The Giants!

How To 'Win' Any Argument, Fast
face in life. She's wise beyond her years. Between her 'off the charts' personality and humor, she makes listening to her ideas totally addictive. 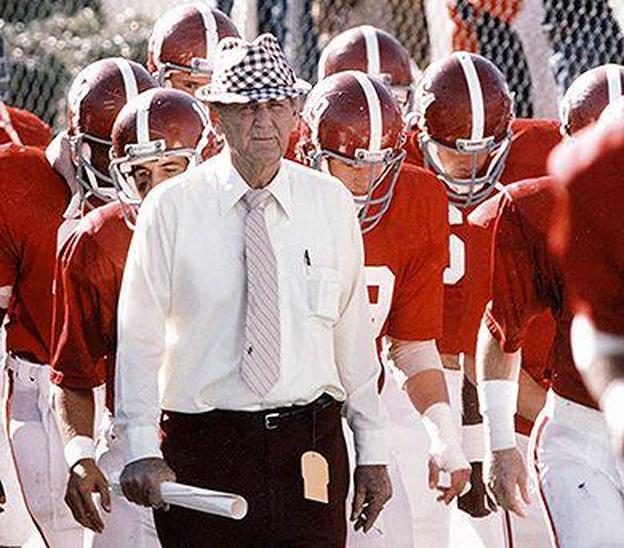 I had just been named the new head coach at Alabama and was off in my old car down in South Alabama recruiting a prospect who was supposed to have been a pretty good player, and I was having trouble finding the place.
Getting hungry, I spied an old cinderblock building with a small sign out front that simply said "Restaurant." I pull up, go in, and every head in the place turns to stare at me. Seems I'm the only white fella in the place. But the food smelled good, so I skip a table and go up to a cement bar and sit. A big ole man in a tee shirt and cap comes over and says, "What do you need?"
I told him I needed lunch and what did they have today?
He says, "You probably won't like it here. Today we're having chitlins, collard greens and black-eyed peas with cornbread. I'll bet you don't even know what chitlins are, do you?"(small intestines of hogs prepared as food in the deep South)
I looked him square in the eye and said, "I'm from Arkansas , and I've probably eaten a mile of them. Sounds like I'm in the right place."
They all smiled as he left to serve me up a big plate. When he comes back he says, "You ain't from around here then?"
I explain I'm the new football coach up in Tuscaloosa at the University and I'm here to find whatever that boy's name was, and he says, "Yeah I've heard of him, he's supposed to be pretty good." And he gives me directions to the school so I can meet him and his coach. As I'm paying up to leave, I remember my manners and leave a tip, not too big to be flashy, but a good one, and he told me lunch was on him, but I told him for a lunch that good, I felt I should pay. The big man asked me if I had a photograph or something he could hang up to show I'd been there. I was so new that I didn't have any yet. It really wasn't that big a thing back then to be asked for, but I took a napkin and wrote his name and address on it and told him I'd get him one.
I met the kid I was looking for later that afternoon and I don't remember his name, but do remember I didn't think much of him when I met him.
I had wasted a day, or so I thought. When I got back to Tuscaloosa late that night, I took that napkin from my shirt pocket and put it under my keys so I wouldn't forget it. Back then I was excited that anybody would want a picture of me. The next day we found a picture and I wrote on it, "Thanks for the best lunch I've ever had."
Now let's go a whole buncha years down the road. Now we have black players at Alabama and I'm back down in that part of the country scouting an offensive lineman we sure needed. Y'all remember, (and I forget the name, but it's not important to the story), well anyway, he's got two friends going to Auburn and he tells me he's got his heart set on Auburn too, so I leave empty handed and go on to see some others while I'm down there.
Two days later, I'm in my office in Tuscaloosa and the phone rings and it's this kid who just turned me down, and he says, "Coach, do you still want me at Alabama ?"
And I said, "Yes I sure do." And he says OK, he'll come.
And I say, "Well son, what changed your mind?"
And he said, "When my grandpa found out that I had a chance to play for you and said no, he pitched a fit and told me I wasn't going nowhere but Alabama, and wasn't playing for nobody but you. He thinks a lot of you and has ever since y'all met."
Well, I didn't know his granddad from Adam's housecat so I asked him who his granddaddy was and he said, "You probably don't remember him, but you ate in his restaurant your first year at Alabama and you sent him a picture that he's had hung in that place ever since. That picture's his pride and joy and he still tells everybody about the day that Bear Bryant came in and had chitlins with him..."
"My grandpa said that when you left there, he never expected you to remember him or to send him that picture, but you kept your word to him and to Grandpa, that's everything. He said you could teach me more than football and I had to play for a man like you, so I guess I'm going to."
I was floored. But I learned that the lessons my mama taught me were always right. It don't cost nuthin' to be nice. It don't cost nuthin' to do the right thing most of the time, and it costs a lot to lose your good name by breaking your word to someone.
When I went back to sign that boy, I looked up his Grandpa and he's still running that place, but it looks a lot better now. And he didn't have chitlins that day, but he had some ribs that would make Dreamland proud. I made sure I posed for a lot of pictures; and don't think I didn't leave some new ones for him, too, along with a signed football.
I made it clear to all my assistants to keep this story and these lessons in mind when they're out on the road. If you remember anything else from me, remember this. It really doesn't cost anything to be nice, and the rewards can be unimaginable.
Coach Paul "Bear" Bryant

Tell us what we can do help you... Turn your dreams into your realities.
Call us any time with... Questions, Suggestions, Comments & Feedback
Voicemail Hotline - (941) 227-6277 Thank you!

The Newsletter that helps you to 'Build-A-Better-Life'

The "IQ Morning Report" is published by Jim Vaughan
Featuring... "Ideas to improve all the tomorrows of your life."﻿

[LEGAL]  The IQ Morning Report is a website that exist for educational purposes. The architecture of these sites is a link directory, linked to audio, print, photography, and video content, freely available to anyone who searches for it. The primary benefit we offer is to save time for our "build-a-better life" subscribers  We are proponents of the ownership rights of copyrighted materials  Our lead in and link to content on your site, in our opinion, falls under the "Fair Use" clause of copyright law.  Fair Use, noun, (in US copyright law) the doctrine that brief excerpts of copyright material may, under certain circumstances, be quoted verbatim for purposes such as criticism, news reporting, teaching, and research, without the need for permission from or payment to the copyright holder.  Should you or your company own copyrighted material that we link to and you would prefer we not do so in the future, send us an email and we will cheerfully, immediately, comply with your request.  IQMorningReport@gmail.com
Some of the training courses we talk about on this site offer affiliate marketing programs meaning, if you buy from them we are paid a commission. Nothing you will see on this page was chosen for that reason. If we believe in the program, we added it to the site. Our long term reputation for excellence is far more valuable to us than any short term commissions we might earn from a sale. If you are not 100% satisfied with any vendor, please let us know. We can make that vendor disappear faster than we were able to add them. Jim Vaughan, Editor
"Shared & Pinned" images from Facebook & Pinterest.