The best place to learn anything is to... "Learn From The Giants"

Featuring... "The lessons they didn't teach you in school."
Suggest you journal 'The Power Ideas' that mean the most to you and then, review your journal regularly.

Heroes you didn't know were heroes...
Why Did Mr. Rogers Wear A Sweater and other news-worthy tid bits:
Captain Kangaroo passed away on January 23, 2004 at age 76, which is odd, because he always looked to be 76. (DOB: 6/27/27)
His death reminded me of the following story.
Some people have been a bit offended that the actor, Lee Marvin, is buried in a grave alongside 3 and 4-star generals at Arlington National Cemetery . His marker gives his name, rank (PVT) and service (USMC). Nothing else.
Here's a guy who was only a famous movie star who served his time, why the heck does he rate burial with these guys? Well, following is the amazing answer:
I always liked Lee Marvin, but didn't know the extent of his Marine Corps experiences. In a time when many Hollywood stars served their country in the armed forces often in rear echelon posts where they were carefully protected, only to be trotted out to perform for the cameras in war bond promotions, Lee Marvin was a genuine hero. He won the Navy Cross at Iwo Jima. There is only one higher Naval award...the Medal of Honor!
If that is a surprising comment on the true character of the man, he credits his sergeant with an even greater show of bravery.
Dialog from "The Tonight Show with Johnny Carson"
His guest was Lee Marvin...
Johnny said, "Lee, I'll bet a lot of people are unaware that you were a Marine in the initial landing at Iwo Jima .. and that during the course of that action you earned the Navy Cross and were severely wounded."
"Yeah, yeah... I got shot square in the bottom and they gave me  the Cross for securing a hot spot about halfway up Suribachi. Bad thing about getting shot up on a mountain is guys getting shot hauling you down. But, Johnny, at Iwo, I served under the bravest man I ever knew... We both got the Cross the same day, but what he did for his Cross made mine look cheap in comparison.
That dumb guy actually stood up on Red beach and directed his troops to move forward and get the hell off the beach..
Bullets flying by, with mortar rounds landing everywhere and he stood there as the main target of gunfire so that he could get his men to safety. He did this on more than one occasion because his men's safety was more important than his own life.
That Sergeant and I have been lifelong friends. When they brought me off Suribachi we passed the Sergeant and he lit a smoke and passed it to me, lying on my belly on the litter and said, "Where'd they get you, Lee?" "Well Bob....if you make it home before me, tell Mom to sell the outhouse!"
Johnny, I'm not lying, Sergeant Keeshan was the bravest man I ever knew. The Sergeant's name is Bob Keeshan. You and the world know him as Captain Kangaroo."
On another note, there was this wimpy little man on PBS, gentle and quiet. Mr. Rogers is another of those you would least suspect of being anything but what he portrayed to our youth.
But Mr. Rogers was a  U.S. Navy Seal,  combat-proven in Vietnam with over twenty-five confirmed kills to his name. He wore a long-sleeved sweater on TV to cover the many tattoos on his forearm and biceps. He was a master in small arms and hand-to-hand combat, able to disarm or kill in a heartbeat.
After the war Mr. Rogers became an ordained Presbyterian minister and a pacifist. Vowing to never harm another human, he also dedicated the rest of his life to trying to help lead children on the right path in life.  He hid away the tattoos and his past life and won our hearts with his quiet wit and charm.
America's real heroes don't flaunt what they did. They quietly go about their day-to-day lives, doing what they do best.   They earned our respect and the freedoms that we all enjoy. Look around and see if you can find one of those heroes in your midst. Often, they are the ones you'd least suspect, but would most like to have on your side if anything ever happened.
Take the time to thank anyone that has fought for our freedom. With encouragement, they could be the next Captain Kangaroo or Mr. Rogers.
(Author Unknown)

I'm well North of retirement age but, if I were a General Manager or a Salesmanger, every sales person working for me would be required to read all three books and I would give tests on the contents of each individual chapter. It's the only way I know of to guarantee myself that every salesperson would be fully qualified to earn all they wanted to earn selling for my company. Click anywhere on the illustration to go to eBay where you can get all three for a special discounted price. (JIm Vaughan)
PS: No, Ben Gay, III, did not pay me to say this. 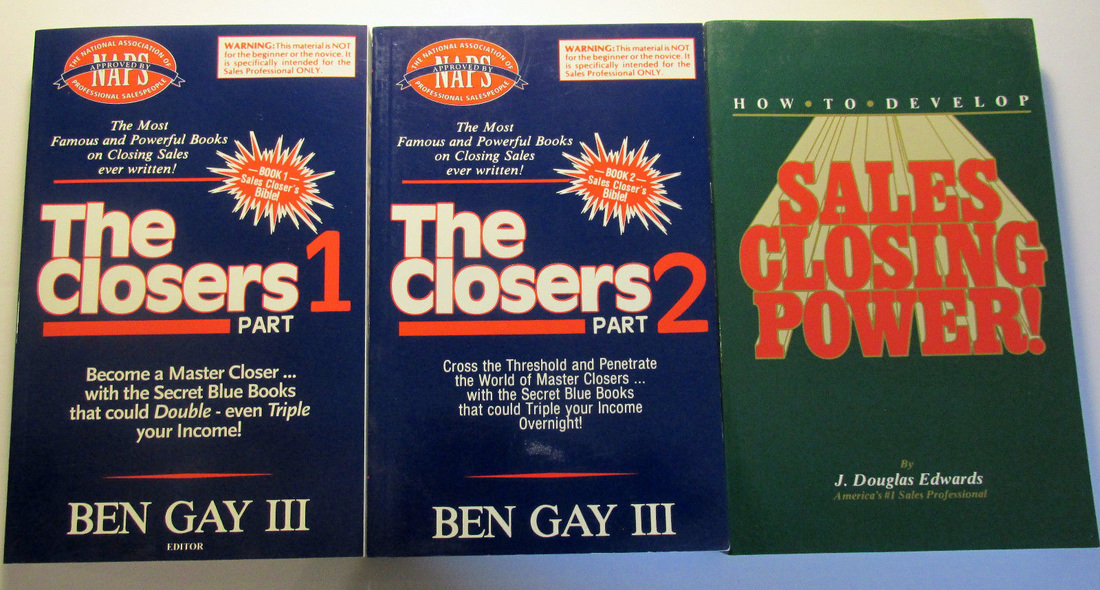 More 'Build-A-Better-Life' ideas for you to THINK about...

Did you save any of your favorite ideas in your journal? Over time, as you harvest the best ideas and 'journal your better future', your 'Success Journal' will become the #1 favorite book in your entire library.

The "IQ Morning Report" is published by Jim Vaughan, Featuring...
"Ideas to improve all the tomorrows of your life."﻿

​The IQ Morning Report is a website that exist for educational purposes. The architecture of this site is a link directory, linked to audio, print, photography, and video content, freely available to anyone who has the time to search for it. The primary benefit we offer you is the amount of time (about three hours for each edition) we save for our "build-a-better life" subscribers.
We are proponents of the ownership rights of copyrighted materials  Our lead in and link to content on your site, in our opinion, falls under the "Fair Use" clause of copyright law.  Fair Use, noun, (in US copyright law) the doctrine that brief excerpts of copyright material may, under certain circumstances, be quoted verbatim for purposes such as criticism, news reporting, teaching, and research, without the need for permission from or payment to the copyright holder.  Should you or your company own copyrighted material that we link to and you would prefer we not do so in the future, send us an email and we will cheerfully, immediately, comply with your request.  IQMorningReport@gmail.com
Some of the training courses we talk about on this site offer affiliate marketing programs involving commissions. Nothing you will see on this page was chosen for that reason. If we believe in the program, we added it to the site. Our long term reputation for excellence is far more valuable to us than any short term commissions we might earn from a sale. If you are not 100% satisfied with any vendor, please let us know. We can make that vendor disappear faster than we were able to add them. Jim Vaughan, Editor
"Shared" content from a variety of Social Media platforms.